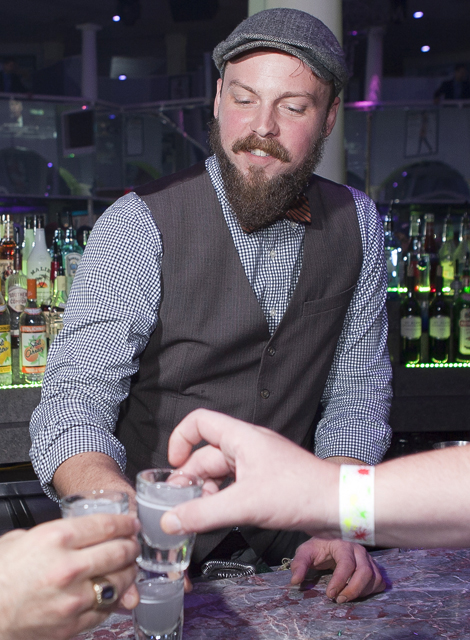 He may be a tough and seasoned man, but the creation he decided to debut for the battle was on the sweet side. Conte premiered his new creation of milk, chocolate, and banana infusion, which he calls the Coco Loco. Aside from the tropical side, his heart is in the old school art.

“I like to make anything old school – Martinis, Manhattans, Rob Roys, Old Fashioneds, things like that – because I find that bartending is a lost art,” Conte lamented. “Drinks like that…are all about the presentation.”

“We looked for style, taste, and how long it was going to take for them to do it,” said Wilson. “Efficiency is part of style.”

After all was said and done, bartender Kaleigh Humphreys came out on top. She wooed the judges with a cocktail called the Mamma Jamma Cocktail, which includes blackberry jam preserves, vodka, fresh mint-infused simple syrup, and fresh-squeezed lemon juice. Humphreys’ shot was called the Smokin’ Basil Lemon Drop and was truly a sight to behold. Imagine citrus vodka, fresh-squeezed lemon juice, basil-infused simple syrup, and just a dash of liquid nitrogen to create a frigid floating cloud to wash over your hand.