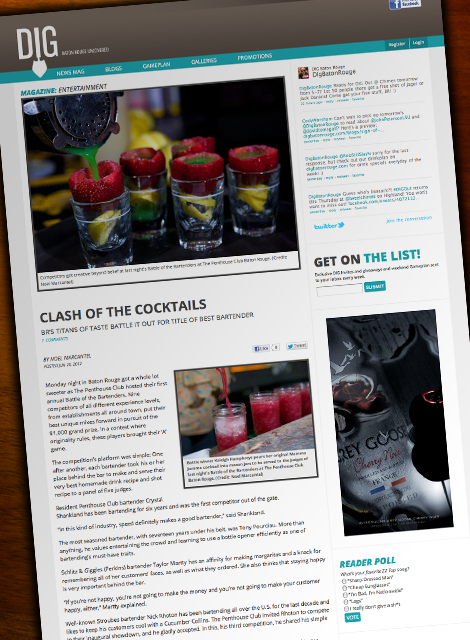 CLASH OF THE COCKTAILS

BR’S TITANS OF TASTE BATTLE IT OUT FOR TITLE OF BEST BARTENDER
DIG BATON ROUGE /  BY NOEL MARCANTEL POSTED JUN 20, 2012

Monday night in Baton Rouge got a whole lot sweeter as The Penthouse Club hosted their first annual Battle of the Bartenders. Nine competitors of all different experience levels, from establishments all around town, put their best unique mixes forward in pursuit of the $1,000 grand prize. In a contest where originality rules, these players brought their ‘A’ game.

The competition’s platform was simple: One after another, each bartender took his or her place behind the bar to make and serve their very best homemade drink recipe and shot recipe to a panel of five judges.

Resident Penthouse Club bartender Crystal Shankland has been bartending for six years and was the first competitor out of the gate.

“In this kind of industry, speed definitely makes a good bartender,” said Shankland.

The most seasoned bartender, with seventeen years under his belt, was Tony Pourciau. More than anything, he values entertaining the crowd and learning to use a bottle opener efficiently as one of bartending’s must-have traits.